What struck me upon meeting Tom Jones for the first time in 1972 was that he was easygoing, casual, and, well, affable.  Not the expected, “I am lion hear me roar,” sex machine that had been described over the years.  When he sings, he sings without an accent, but when he speaks off-stage, he speaks with a Welsh accent.  He was just so darn real, life-size, and human off-stage.  On-stage, when Jones takes the stage, the star and The Voice become larger than life.  The largest venue I’ve seen him perform is the Los Angeles Forum, and I discovered that even in the large arenas, Jones was always bigger than his biggest venue.

What would it be like, to be a singer who is able to take command of a stage and an audience?  What is that feeling that singers feel?  Is it love?  Joy?  Adulation?  Acceptance?  Oneness with the audience?  Power? Is that what Tom Jones longed for when he was a young prepubescent boy stricken with TB and stuck at home alone?  Is it what he yearned for when he got his first real taste of popularity singing in the local Welsh pubs?  Is that what he felt when he claimed his fame and fortune?  Is it enough to fill you when you are on the road 24 Hours?

24 Hours is a critically acclaimed CD that preceded Jones’ recent Praise and Blame, with many songs co-written by Jones.  Some of the songs in 24 Hours are autobiographical and reflect the challenges a family deals with when a singer travels the road for a living 24/7.  There was much buzz about the ode to his long-time wife in “The Road,” by Tom Jones, Iyiola Babatunde Bablolla, Armando Manzanero, Lisa Rachelle Green, and Darren Emilio Lewis.  You have to know Jones and his story to get the connection to “Seen That Face” by Tom Jones, Iyiola Babtunde Babalola, Nicole Louise Morier, and Darren Emilio Lewis, which describes the recognition of pain on a child’s face when you leave him.

Whatever that feeling is that singers get, they get hooked on it like crack, and follow it through the gypsy lifestyle with its infamous sex, drugs, and rock and roller-coaster, which takes its toll on anyone who enters the golden gates of fame and fortune.  The life of a gypsy singer is fraught with struggles. It is the struggle of breaking into the industry.  Then there is the struggle to stay at the top. There is also the struggle to ride the ebb and flow of a career in the music industry, which eats you up and spits you up as fast as it can; or as fast as the gifted one can self-destruct.  And family members are along for the ride. 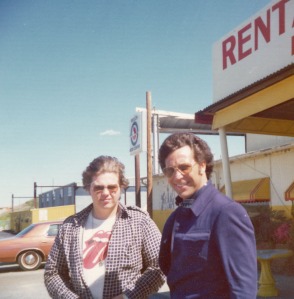 Jones with son, Mark. “This is Tom Jones” Fan Club

The most insidious loss for anyone involved with a gypsy singer is the difficulty of maintaining intimate family relationships, because it always starts out with the intention of being a positive thing for the family.  Tom Jones’ story is no different.  He had a wife and a child by the time he was 17-years-old and he knew he had talent.  The goal was to support the family.  “I started singing in clubs about the time he [son, Mark Woodward, who kept Jones’ surname; Jones is Tom’s mother’s maiden name] was born, so I wasn’t around him much.  I went to London in 1964, and my wife would come to see me, but I didn’t see my son unless I went back to Pontypridd.  I wanted to, but I was very preoccupied.  From 1965 I started going to America a lot – the records were as big there as here [England].  I didn’t have time to be in Wales, but I thought as long as I was sending money home it was okay.” (“Relative Values: Tom Jones and Mark Woodward, by Bridget Freer, The Sunday Times, UK,12/8/02).

What about the wife and child?  Where do they fit in?  How do they live a family life at home without that gypsy singer?  Once the struggle is over, is it all glamour and riches?  Is it lonely?  How do you live your life without the love of your life around?  Who do you have intimate relationships with (and I don’t mean sexual intimacy, I mean close, sharing, relationships).  And who does the gypsy singer become intimate with?  The gypsy singer becomes close to the gypsy roadie family.  And, like it or not, they do go “lookin’ for love in all the wrong places.” 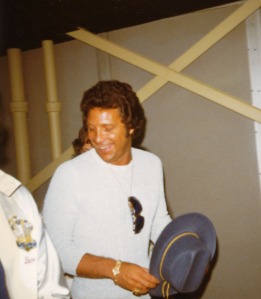 How do you participate in the family’s emotional needs while sustaining them financially as a gypsy singer?  This is how the young Jones family did it, according to Bridget Freer’s 2002 interview with Tom and Mark:

TOM:  “Mark’s had a life most kids haven’t had with their fathers.  We became closer as men than we did when I was a teenager and he was a little boy, and that was through working together.  We got older together…

“When the money started rolling in from “It’s Not Unusual,” I bought a house in Shepperton and said: ‘Now we can have Mark with us.’  That was 1966.  I enjoyed going to pick him up from school…  The mothers would be:  ‘Oooooh, there’s Tom Jones!…

“He was a shy child.  He spent a lot of time in his room listening to music.  Later, there’d be six-month tours; it affected him more than I realized.  He came out for school holidays wherever I was, and always seemed fine.  But one night, when he was 15, we went to a restaurant and he was very quiet.  Linda said: ‘He’s missing you a lot now.’  We talked it over and she said: ‘Do you think he could travel with you?  I said:  ‘Yeah, as long as it’s okay with his school’…”

MARK:  “Me and my mother were alone a lot.  She felt the strain, but she couldn’t go with him because I was in school.  I missed him.  It came to a head when I was an adolescent.  I got depressed, and my parents didn’t know what to do.  It was only the three of us – three young people.  It was a big decision, but I left school and went on tour with him.

All my working life has been in my father’s business.  I never wanted to do anything else.  I was a roadie first, and whenever somebody got fired I learnt their job.  Tom let me have a lot of input.  I would never call him Tom to his face – that would feel weird.  I call him Tom to a third person.  I couldn’t say: ‘Would you book my daddy?’

He never gave me the father-son talk.  I had to learn from experience.  I was with grown-ups 24 hours a day…  He wasn’t a 55-year-old guy in a suit coming home from his nine-to-five, laying down the law: he was in his thirties, with a very unusual lifestyle.  My mother too – we all had an unusual lifestyle.  That made them more sympathetic to me…

Soon after Gordon Mills, Tom’s manager, died, Tom said: ‘Are you willing to take the reins?’  I hesitated, because it’s all well very well having an opinion, but as manager, if a business decision went sideways it would fall on my shoulders.  But it made sense:  I was a 29-year-old, road-hardened kind of fellow, and as soon as I had my own family, I decided I couldn’t carry on travelling…  I felt more qualified than ever to be his manager.”

The Jones family dealt with their family issues as best they could, and in the end, it kind of worked out for them.  In the 70s, however, most people raised eyebrows and reporters cast aspersions over the fact that Tom Jones allowed his underage son to travel with him.  I remember thinking, in my teens mind you, that their family decision was brilliant.  I was totally enmeshed with my own mother, and so I believed I understood a child’s need, a son’s need, to be with his father, even though the gypsy lifestyle is unhealthy.  It was also my teenage thoughts that made me believe that somehow I could possibly make Tom Jones fall in love with me and fit in with that crazy gypsy lifestyle.  I discovered, years later, that the brain isn’t fully developed until the age of 25 – Duh…  (Oops, pardon the weak Charlie Sheen reference.)

At one point, my mom sort of half-joked, “You should flirt with Tom’s son!”  Mother was right.  I should have been interested in Tom’s son, who was only four years younger.  We surely had more in common.  We were closer in age.  Mark was shy; I was shy.  Mark felt uncomfortable at school; I felt uncomfortable at school.  Mark spent a lot of time in his room listening to music; I spent a lot of time in my room listening to music.  Mark had a family of three; since my sisters left home I had a family of three.  Mark was depressed; I was anxious.  Helloooooo… conversation starters!  His whole life was wrapped up in press and public relations and I was studying PR.

Mark eventually married and gave Jones a daughter-in-law PR person/manager and both Mr. and Mrs. Jones a grandson and granddaughter.  Jones was only 41 when he became a grandfather.  Whenever I had the opportunity to speak with Mark Woodward, I have to admit, I choked.  I was better with older people, and he was probably better with older people; neither one of us realized that we were the youngest kids around who might have had something in common when we were within arm and ear’s reach.  Besides, Tom Jones was providing a deep psychological purpose for me – I just didn’t know it at the time.  All I knew was that in order to make this gypsy singer fall in love with all six-foot-two-and-scared-of-her-shadow-me, I had to figure out a way to get over my fears… for the singer who saved me.

You are currently browsing entries tagged with depression at Singer Saved Me.