We returned to Vegas in spring of 1972.  This time Tom Jones was at Caesar’s Palace.  The hotel was dripping with gauche golden Roman decor, and men and women running around the casino wearing togas.  Former fighter, Joe Louis was Caesar’s formal “greeter,” wandering around the hotel welcoming the guests.  There were often comedians, such as Don Rickles, Norm Crosby (he toured with Tom and his malapropisms teased about “the fringe on his benefits”) and football stars, such as Deacon Jones, and many other football players whose names I’ve forgotten, hung out in the casinos or by the pool.

This trip was just me, Mom, and Tom (forget the several thousands of others there to specifically see TJ).  This trip to Vegas wasn’t something I had to earn, so it was all about seeing Tom Jones and loooooking goooood.  I spent a lot of time preparing just the right clothes, sewing most of them, because during that time period, there weren’t a lot of clothese to fit my 6’2” frame.  If, I wanted to wear pants, I had to make them myself to fit my 36-inch inseam; if I wanted to wear jeans, I had to buy them in the men’s department, and let’s just say, there was always just a little too much fabric in the crotch area.

Despite all of my clothing challenges, Mommio and I were dressed to the nines from arrival to departure in Vegas.  Yep, while I had a distinctly spiritual side that prayed and thought about how to be a good daughter, a good person, and a good citizen of the world, I had this flip-side that focused trying to make myself look good in order to make Tom Jones fall in love with me.  Because if Tom Jones fell in love with me, I would feel beautiful, right?  Because, “I leaned the truth at seventeen that love was meant for beauty queens…At seventeen I learned the truth/And those of us with ravaged faces lacking in the social graces/Desperately remained at home inventing lovers on the phone/Who called to say come dance with me…It isn’t all it seems at seventeen.” (“At Seventeen,” lyrics by Janis Ian)

At almost nineteen, something very strange began to occur.  Boys who used to be really mean, were suddenly looking at me in a different way.  I was still just as skinny, but any ounce of fat that I gained went to what judge Len Goodman, on Dancing with the Stars, refers to as the “chesticle” area.  Instead of being told, “You’re so skinny you look crippled,” (yes, someone had the gall to say that), boys, and even men, were suddenly saying, “Hey baby, hey baby,” (imagine Gwen Stefani singing the chorus).  But the change was too fast.  It was confusing.  What I was beginning to hear, didn’t match the internal dialogue inside of my head that said I was different and I wasn’t good enough.

As Mother and I enjoyed two fabulous days of fantastic Tom Jones’ shows, she had figured out how to get us seated at center stage.  There would be no more viewing from afar – uh-uh, oh no.  From now on it was up close and personal.  From now on, Jesse the maitre’d was the man to get us close to our man. Jesse and Mom spoke a special language called Greenback, and I think it took about 50-60 greenbacks to get us to that center-stage, touch-TJ’s-boots seating.

One thing we found fascinating was, how many men end up at Tom Jones’ shows, especially in Vegas.  These dear husbands, fathers, sons, and boyfriends who love their women so much that they are willing to sit around a bunch of women who are prime to go crazy and throw some panties at a man singing “What’s New Pussycat.”  The men are always won over by his voice.  Always.  That is the power of The Voice.  Despite the singer’s sexual antics and all of the wild women, The Voice is always the most important presence on the stage.

At our first show the music played, and the words announced, “Ladies and Gentlemen, this is… Tom Jones,” and I found myself literally sitting at the feet of the man who had been singing my teenage pain away, singing my adolescent heart to beat, and singing my youthful soul alive.  I knew the rhythm of his show (i.e., he sang two upbeat songs, then took a break to say hello to the audience and have a drink, before singing a slow song).  Suddenly, after the second song, I found myself standing, and this shy, awkward girl who was afraid to walk to the mailbox or go to school became determined, brave, and womanly, with a glass of water in her hand reaching out as an offering.  I heard him say to the band, “Well, looky here, there’s long, tall Sally.”  Jones was referencing the song, and the first of two nicknames he gave me over the years:

“Long tall Sally has a lot on the ball

And nobody cares if she’s long and tall

I’m having me some fun tonight…” 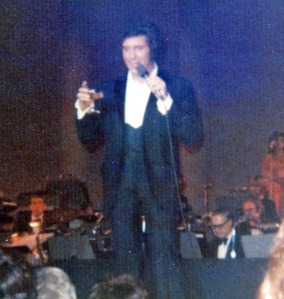 We had a mini on-stage chat, during which I lied about my age.  My spiritual side which told me to always be truthful, was always at war with my need to make contact with my object of transition, but there was no way I was ever going to voice the word “teen” in any conversation I ever had with Mr.  Jones.  That could seriously jeopardize his ability to fall in love with me, which was, after all, my ultimate goal.  Remember too, I looked far more mature than I actually was.  And then it happened.  Tom Jones leaned over, put his arm around my back, and kissed me.  This was not a little peck on the lips kind of kiss.  This was a man kissing a woman kiss.  This was my first kiss ever, with any man.  How lucky can a tall, skinny girl who was bullied and teased and felt nervous and anxious and terrible about who she was get?  My first kiss was with… the singer who saved me.

You are currently browsing entries tagged with Las Vegas Shows at Singer Saved Me.