Ode to Jones The Voice

I am quite jealous that the British version of “The Voice” with The Voice is currently being taped in England and I cannot jet across the pond and somehow inveigle my way into the audience.  Oh, hold on!  Stand down Snow White!  Sit still before you go all watusi on the page Long Tall Sally!  The days of inveigling your way into Tom Jonesville are days gone by.  (Oops, pardon the open reality check.)

Jones has mentioned that when he was growing up in Wales, it was common practice to attach your profession to your name, and I so want to honor Jones The Voice, because he played such an important and unwitting role in saving me when I was a young girl at risk.  Tall, thin, teased and bullied, I withdrew from the world and found comfort, solace, and at times, my life’s blood, through the voice of singer Tom Jones.

Just by having and sharing The Voice, Jones served a far greater purpose in my life than my teenage dreams could have ever imagined, and I know that I am not alone.  Others have revealed poignant stories regarding how The Voice has affected their lives.  What I didn’t realize in my youth was that it was actually The Voice that carried me through the challenges in my life – not the man to whom I felt so attached.  It was always The Voice that soothed my fervor brow; it was The Voice that took me from the depths of despair to thoughts of hope; it was The Voice that led me from high anxiety to moments of courage.

I like to look through a psychological lens in object relations theory, which focuses on one developing a psyche (our conscious/unconscious mind; our ego strength, or sense of self) in relationship to others.  As an infant, we look to our mother to create a safe, consistent, nurturing environment, and without that sense of safety, that infant can perceive the world as not a safe place, and can develop a hypersensitivity to the outside world.  Along the way to maturity, I hit a big bump in the road, and my own natural sensitivity and already tentative sense self, or weak ego strength, was completely knocked off-kilter by bullying at school.   My extraordinary height for a young girl in the 60s & 70s, and naturally thin body during a time when anorexia was truly considered a disease and not a positive fashion statement, made people feel uncomfortable.  The incessant need for strangers and others to constantly comment on my physicality only added salt to the self-conscious wound.

We all need something outside of ourselves to attach to, or connect with, that can help us cope with life’s uncomfortable, or difficult, or anxiety-producing challenges.  An infant turns to its mother for that sense of safety.  Where do you go when you are older?  You go to religion and a Higher Power, philosophy or psychology, literature, art, or music.  You turn to people for comfort – family, friends, teachers, mentors, religious figures, counselors, therapists, etc.  Everyone thought Michael Jackson was weird to call his son Blanket, yet it ever to gently speaks to Jackson’s deep attachment needs.  What helps people calm and contain their fears and anxieties?  Trust and faith in something greater than themselves.  Beautiful things in which they can relate, such as lyrics or the sound of music.  Some people relate to the awe-inspiring beauty of nature.  Some find calm and comfort in the feel good feelings that come from exercise.  Others find feel good feelings through connecting to other people; some find it in tattoos or other ways to objectify their feelings.

There is an endless list of possibilities of people/places/things to which you can attach that help transition you through the good and bad times in your life.  My family religion was ever-present in my life experience during my youthful challenges, but The Voice came along and gave me something that was outside of the religious realm, and became an intricate part of my personal journey and salvation.  I attached to The Voice.

The Voice became my warm, fuzzy security blanket that I could access at home, in the car, and carry with me in my head.  As I got older and stronger, The Voice translated into the rhythm of the beat and strength in my step.  The Voice became, as I mentioned in posts so long ago, my motivating mantra at a time when I really just wanted to melt into the floor or disappear into my room – or someplace else – forever.  The Voice provided me with my very own Singer Saved Me exposure therapy, which I didn’t even know about or understand at the time.  It was The Voice that got me outside of myself long enough to put my mother’s goals into place, and eventually set my own goals, take the steps to work toward them, and actually achieve them.  And each goal required leaving the house, interacting with people, and stepping outside of my personal fears. 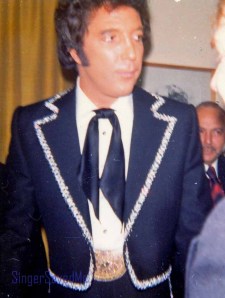 Jones Backstage at the Palladium - 1973

Why that voice?  Why did I attach to that voice?  Reviewers, producers, and musicians have written, or spoken, a bazillion-and-one praises and accolades regarding The Voice, which have spanned over the course of decades.  I would not presume to describe Tom Jones’ voice in a new, unique way.  I just know that The Voice can take you from rock and roll to a Cappella, from to pop to blues, or from light opera to country.  Jones’ voice is extraordinarily versatile, and perhaps, that is the greatest gift of The Voice.

If you are very, very talented, have a variety of very, very astute people helping you along the way, and are very, very lucky in the entertainment industry, you might be able have a long career sprinkled with peaks and valleys.  It is easy to remember Jones’ peaks – the hit records, the TV show, the huge fan-filled stadiums like Madison Square Garden and the LA Forum, and the 40-plus years of packed houses in Vegas.  Yet, something I found endearing occurred a long time ago in the late 80s or early 90s – I haven’t been able to pinpoint the exact date.  I was driving my minivan, (a long, long way away from a Porsche chasing a limousine), on Harbor Boulevard in Orange County.  It’s not the nicest area, and in fact, you might find a “lady of the night” wandering around in the middle of the day, and like a diamond in a brass ring, I suddenly saw the name “TOM JONES” on the sign of a small, local club that was known to have everything from punk to metal, Willy Nelson to Hall & Oates, and a lot of local unknown singers, bands, or cover bands.

As soon as I got home, I called the venue out of curiosity.  “Excuse me, Galaxy Theatre, is singer Tom Jones, the Welsh singer Tom Jones, the superstar Tom Jones, THE Tom Jones actually going to perform at your club?”  The ticket person said, “Yes, ma’am.”  Oh Lord, have mercy.  I was in shock.  Tom Jones was playing at a small, local place in the OC where mostly unknowns, sprinkled with a few famous players play?  Oh Lord, have mercy.  I immediately called my mother to discuss how on earth he could have possibly ended up there.  I asked, “Why would he play there when he has played for the Queen of England?”  It boggled my mind.  How could he play there when he has played at the big Pacific Amphitheatre in the same city?  It was a puzzle that I tried to piece together.

I didn’t get to see The Voice at the Galaxy Theatre, because, at that point in time, “I” had turned into “we,” and in our lives the price of a TJ ticket was the cost of a new tutu and ballet slippers – and the ballerina in my life was my #1 priority.  But, I keenly remember the shock of seeing Jones’ name on the Galaxy marquee, and keenly remember the moment I realized that Tom Jones knows who he is and what he’s accomplished – he simply must sing, as it is his life’s blood.  The Voice… is the singer who saved me.

You are currently browsing entries tagged with Pacific Ampitheater at Singer Saved Me.