The Final Hurrah with Tom Jones, My Object of Transition

Just when I thought I was going to grow up for good and let go of my, well, what was it?  What could I call it?  I simply did not understand it in my teens or my twenties.  Was I addicted to singer Tom Jones?  Was Tom my crack cocaine?  I always had an innate need to understand things, and I just didn’t understand.  I didn’t know what it was. 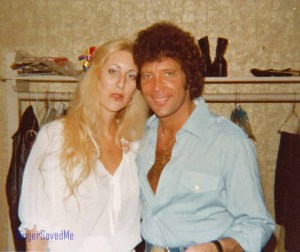 Tom became my safe port in a storm of bullying, my go-to-guy from just plain insensitive people.  They sent me into withdrawal which, combined with my sensitive nature, led to agoraphobia.  He gave me hope that someday a caterpillar could become a butterfly; he gave me courage to do things I would do for no one else.

The Voice became my voice, expressing every emotion I felt – hurt, pain, and sorrow to love, joy, and hope.  I carried it with me everywhere.  I never imagined that Jones’ accessibility would lead to transitional emotional growth.  He had a transformative effect on my life.  That’s right, Sir Tom Jones!  You grew me up in a way no one would ever dream or imagine… except maybe a therapist and object relations’ theorists.

My Last Ticket To Tomjonesville, 1979

After I put all of my life in Tomjoneville in a big brown packing box and carried it to my garage with eyes moist with tears, ready to give it all up – cold turkey – I found myself invited right back into that world.  And I couldn’t say “No.”  Yet, I was beginning to acknowledge, ever so gently to myself mind you, how limited that world had become.  My sights were resetting and my vision of what might be possible in my future began to hope and dream beyond Tomjonesville.  I could see a future far beyond what my delayed development and all that it entailed could see in those early young years.  But Jones was at Knott’s Berry Farm to tape a TV special and his management liked to pack the house with fans and friends, so like a TJ Trooper, I asked Rose to join me for two nights of potential adventures.

As I dressed for the venue’s first night in my jeans and tube top – oh, hold on, I must digress!  Who invented the tube top?  Wikipedia, authority of all things pop culture and beyond, claims it was “invented by American World War II veteran Murray Kleid,” a womens’ accessories manufacturer in New York City.  Why am I not surprised it was a man?  It was a hot fashion statement in the 70s, but I wonder how in the world I had the nerve to wear a tube top?  It seems like such a dangerous piece of clothing, if you could even call it clothing.  It was just a small band of elastic-like cloth, kind of like a fabric cuff for breasts.  The tube top fell into the small amount of attention-seeking clothes I only wore around the singer, like the hot pants jumpsuit I wore in Vegas, which was retired the moment I returned from that trip.

My ritual of getting dressed for any TJ show involved listening to The Voice blaring on the stereo, and I distinctly remember pausing when I heard Tom sing “(If Loving You Is Wrong) I Don’t Want To Be Right” (song by Percy Sledge).  The lyrics, “And am I wrong trying to hold on/ To the best thing I ever had” were messing with my mind.  Was I wrong in trying to hold on to the best thingI everhad?

My mother intuitively knew he was the best thing in my life for a particular period of time.  I am so very grateful she knew.  She knew and I survived.  However, my new goals of love, marriage, and family – things I never dared dream about until after the singer provided me with a corrective emotional experience, because I was so sure I was too tall, too skinny, too undesirable, too sensitive, too fearful, too immature, too this, and too that – now fought with my life in Tomjonesville.  What was a six-foot-two, eyes-of-blue, everybody-sees-this-gal kinda girl gonna do?  What I always did when Tom Jones came to town.  I would make myself known.

Even though my best friend Rosie and I never made it to Las Vegas like we had planned, we did manage to drive to Knottsberry Farm in style.  We zipped up to Buena Park, home of Knott’s Berry Farm, on the gritty, jam-packed 5 freeway in a cinnamon-red Mercedes Benz 450 SL.  We laughed out loud as we reminisced about the wild and wooly Tom Jones limo chase in our not-so-distant past (see The Tom Jones Limo Chase posts, Parts 1 & 2).  And then we felt guilty and a bit embarrassed.  Shame on us.  I might have even sung Shirley & Company’s “Shame Shame Shame”:  Don’t stop the motion/If you get the notion/You can’t stop the groove/’Cos you just won’t move/Got my sun-roof down/Got my diamonds in the back…I say shame, shame, shame, yeah shame on you.  (Written by Sylvia Robinson)

I must admit some of the Knott’s Berry Farm taping is a blur because as excited as  I was to see Tom Jones perform, I was also going through a deeply personal process.  I remember we had good seats and a good time both nights.  And the best part of being at a taping of a TV show is that there are breaks, and when there are breaks Tom pauses and chats up the audience.  “Hellooo Mr. Jooones,” was my mental note to his notice, and the next thing I knew we were engaged in that typical Tom Jonesian silly/funny “Come hither, my luv” banter.

Of course, when the singer kissed me stage-side, I felt the earth move, but it wasn’t an earthquake.  I felt the stars tumbling, but there weren’t any falling stars.  I was still inside Knott’s Berry Farm, and I realized that being in Tomjonesville would always be exciting.  My emotions ran amok.  I realized this thing, this thing I didn’t understand, could go on forever.  When the first night’s taping was over, Rosie gushed about how much fun it was.  As usual, I was good at hiding what I was really feeling and joined in the goodtime talk even though I was completely distracted by my inner world.  As we drove home in the darkness we both agreed how wonderful it was that we could do it all over again the next night.  In the words of the yet unborn Britney, “Oh baby, baby.”

Sleep was a stranger that night because years of emotions and attachment to Tom Jones completely overwhelmed me.  He had been like a secret companion since I was sixteen; someone I saw only occasionally, but carried with me everywhere.  I actually sat in bed and read old poetry and lyrics I had collected that evoked or expressed the myriad emotions I felt about loneliness and rejection, the results of being bullied, and the saving grace of the singer who saved me.  Would I ever forget “In Loneliness” by Henry Wadsworth Longfellow:  Ships that pass in the night, and speak each other in passing, Only a signal show, and a distant voice in the darkness; So on the ocean of life, we pass and speak one another, Only a look and a voice, then darkness and a silence.  Jones was that voice in my darkness.

Then there was Janis Ian’s “At Seventeen,” which so beautifully, yet painfully, sings to adolescent angst:  To those of us who knew the pain/ Of Valentines that never came/ And those whose names were never called/ When choosing sides for basketball/ It was long ago and far away/ The world was younger than today/ When dreams were all they gave for free/ To ugly duckling girls like me.  Ah, the need to be known and loved.

In the romanticism of the late night hours and raw emotional thankfulness for Jones and his place in my life, I was still able to recognize I was no longer withdrawn and painfully lonely.  I had begun to build a small circle of friends, genuine friends with whom I am still close to today.  I had worked through some of my problems, though not all.  I had conquered some fears and gained some confidence.  It made me feel sad and almost nauseous, but I knew what I had to do.  If I wanted to continue to grow as an individual, to grow as a woman, to follow my heart and reach for the next set of goals, hopes, and dreams, I truly did have to take the next train out of Tomjonesville.   And not look back.

Being with Rosie always gave me courage; she was/is a brave and adventurous person.  But on our way to Knott’s Berry Farm the second night, I realized I had to put on my emotional high-heeled sneakers and give her a good time, even though I recognized that night of Jones’ TV taping would be my final hurrah with my then unknown object of transition.  So off Rosie and I sped to that fateful night, slowing only for traffic in our dashing two-seater Mercedes – because (put on your best Atlanta Housewife Phaedra Parks’ voice) everybody knows, if you want to hang with the rich and famous, you have to look like the rich and famous. 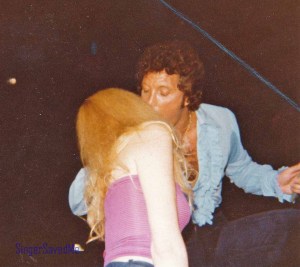 The venue was packed, and Jones was quintessential Jones – delivering on cue, exciting the crowd, and singing like the legend The Voice became.  When we left Knott’s Berry Farm, Rosie had no idea I was in the throes of a TJ crisis, vacillating between wanting to stay where I was, safe and more comfortable with who I had become, or letting go and moving toward the person I wanted to become.  I was thankful for the changes.  I was no longer that child-like, odd-girl-out misfit.  Older, happier, more independent and self-accepting, though far, far from perfect, I had reached the proverbial fork in the road.

The singer who saved me had served his purpose.  With deep gratitude and a heavy – or was it a heaving – heart I realized Tom Jones, the man, was no longer going to play a part in my future.  I had to detach.  In the wee small hours of the morning, the earth, the sun, the moon, and the stars aligned and serendipity followed.  Now in the heart of Bel Air, home and stomping grounds of TJ, I had my moment.  In the warmth of the balmy darkness as Tom pulled my head close to his, I found myself silently saying goodbye forever… as I kissed the singer who saved me.

You are currently browsing entries tagged with Rejection at Singer Saved Me.